Home > Causes of Back Pain > Back Pain and Shingles 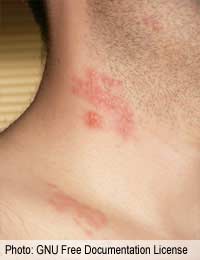 Shingles is very unpleasant, and can cause back pain, as well as pain elsewhere in the body. It is caused by the herpes varicella zoster virus – the same virus that causes chickenpox. It is called shingles because the blisters can look like overlapping tiles (also known as shingles).

Once children (or adults) recover from a bout of chickenpox, the herpes varicella zoster virus can remain dormant in the sensory nerves in the back. In some people, the viral infection can flare up again in adulthood, travelling along the nerves to the skin where it causes a band of blisters known as a dermatome, generally just on one side of the body. This may be in response to stress or depression, an illness or medication that lowers the immune system, or just as a result of ageing – shingles will affect about one in four people in their lifetime, and is more common in people over 50, with the incidence increasing as people get older.

The Symptoms of Shingles

The symptoms of shingles begin as fever, numbness, tingling, itching and pain along the lines of the nerves, and then a rash of small blisters begins to appear. The blisters are filled with fluid and the herpes varicella zoster virus, and follow the lines of nerves, often stopping at the midline of the body. Occasionally, people may develop shingles without a rash – this is known as zoster sine herpete. The lack of a rash means that this form of shingles can be misdiagnosed as migraine, back pain, or even as the symptoms of a heart attack. A shingles attack usually lasts about a month.

Shingles and Back Pain

Because shingles symptoms track along the lines of sensory nerves, the back is a common site for shingles blisters and pain, following the nerves that run across from the spinal cord. The pain may only be on one side of the body.

Post-shingles pain, also known as post-herpetic neuralgia, is pain that continues after the shingles rash has disappeared, and is caused by damage to the nerves. Other symptoms include increased sensitivity to pain, itching and burning. Of people over 70 with shingles, around half may still have pain one year later. In some patients this becomes intractable (untreatable), and can make them become depressed and irritable.

The cause of shingles, the viral infection, can be treated using antiviral agents such as aciclovir, and the earlier that these are started, the better the outcome, and the lower the chance of post-shingles pain, including back pain. Treatment of the symptoms includes soothing lotions such as calamine to treat the itch and discomfort, and painkillers to treat the pain.

A Few Things to Think About

Ageing, Losing Height and Back Pain