Home > Causes of Back Pain > Back Pain Nearly Ruined My Pregnancy: A Case Study

Back Pain Nearly Ruined My Pregnancy: A Case Study 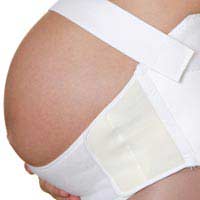 Having a baby is hard work, even if you are fit and healthy but a rough pregnancy, with constant back pain and sciatica, followed by a difficult labour can lead to post natal depression and can nearly ruin the whole experience. “Looking back, I can see that this definitely happened to me and I only now feel I am recovering now that Charlie is nearly four years old,” says Linda.

Linda’s problems began before her pregnancy. “I have always had a tendency to back pain and problems lifting and I have had physiotherapy in my late teens to try to sort out the problem. I was always very keen on running and sport, but eventually had to give that up as I was always injured,” she explains.

At the age of 25, Linda married her boyfriend of four years and found out she was pregnant just over a year later. “I felt well at first; no sickness and I really bloomed. I wanted so much to have a fantastic pregnancy.”

As the months went on, as most pregnant women find, life became rather uncomfortable. Linda’s back problems returned with a vengeance and, at about the fifth month, she started to experience a burning and shooting pain down her legs. “My ante-natal care team knew about my previous back problems so I was quickly referred to a back specialist and was diagnosed with an inflamed sciatic nerve. This is not very common in pregnancy but it happened to me – apparently not because of my previous back problems either but they didn’t help,” she says.

From the seventh month of pregnancy onwards, Linda was in constant pain and found it difficult to do ordinary things. “Getting in and out of the car was painful, getting out of bed was painful and lifting shopping was a nightmare. I had to give up work early and I was stuck at home, not able to take pain killers and trying to cope using every cushion of every shape I could possibly find. This was definitely not the fantastic pregnancy I had hoped for,” she recalls.

The pain continued without much relief until, at last, the day came when Linda’s labour began. “I was happy but not for long. I was in labour for 18 hours altogether, and it was so painful. The contractions hurt but my back kept going into spasm and I just could not get into a position that I could cope with. I had gas and air and pethidine, but that just made me sick and it didn’t touch the shooting pains down my leg. After 10 hours I begged for an epidural,” explains Linda.

The epidural did help quite a bit but by this time Linda was exhausted and, in the end, an emergency caesarean had to be arranged. “I was disappointed not to give birth naturally but glad it was all over really.”

After the birth, Linda’s back pain took a few weeks to start to ease and she found the early days of looking after a small baby very hard. “In the end, I gave up trying to be a model mum to match up with my ideas of what I should be doing and stayed in bed most of the time and we ate ready meals for a month. My husband did a lot of the walking around with Charlie, getting him off to sleep, bringing him to me for feeding and when he went to work, he left me a huge bottle of squash and a packed lunch so I could cope in bed until he got home. He would joke that I owed him pack ups for a year after this...” she laughs.

In the end, having Charlie did make it all worthwhile and although neither Linda or her husband have yet felt ready to have another baby, they have decided that Charlie will not be an only child. “We coped in the end and, like so many things in life, what we expected didn’t quite happen. But our experience has not taken away the pride we feel in being Charlie’ parents,” she smiles.