Home > Causes of Back Pain > Back Pain and Evolution 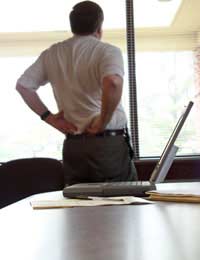 Low back pain is a common complaint in modern society – but is it caused by modern lifestyles or is it part of the evolution from an ape-like ancestor to humans that stand and walk on two legs?

The Shape of the Spine

Humans have evolved from ancestors that are similar to modern apes. The spines of apes are relatively straight because, while some apes do walk on two legs occasionally, they tend to spend most of their time on all fours. The spines of modern humans have evolved to have a gentle S-shaped curve, because this helps support and spread the weight of the upper body, and maintain balance while on two legs. This curve becomes more exaggerated in women during pregnancy, in order to help maintain balance as the baby grows and the woman’s centre of gravity changes. This increased curvature usually after birth.

When humans started standing and walking, a spine that originally evolved to be parallel to the ground became upright, and had to cope with supporting the whole of the upper body weight when standing and walking. There have been some changes to the human spine through evolution to help with the upright posture, but it is also important to make sure that the core muscles, including the stomach and back muscles, are strong, to help support the spine. Maintaining a healthy weight also helps, as it reduces the load that the spine has to carry.

Back Pain and Organs

When humans’ ancestors were on all fours, the organs inside the body hung down from the spine. Once human beings started to walk to two legs, these internal organs could potentially become compressed by the weight of the organs above them, which can cause discomfort, and this can be felt in the back, which is known as ‘referred pain’.

Our ape-like ancestors were much more active, spending much more time finding food and defending territory. Many modern humans have sedentary jobs, for example spending a lot of time in front of computers. This can cause back pain, stiffness and discomfort, partly because the stomach and back muscles do not get enough exercise and therefore are no longer strong enough to support the upper body. The increasingly sedentary lifestyle can go with increasing body weight, which puts further stress on the back.

Ageing, Losing Height and Back Pain