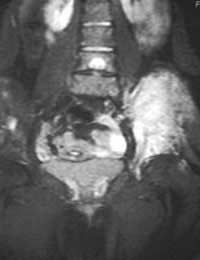 Ewing’s sarcoma is a rare cancerous tumour of bone and soft tissue that affects 2 in every million children in the UK. Although it is classed as a childhood cancer, it is rarely diagnosed in children younger than five. Most cases are discovered in teenagers who are passing through puberty and this cancer is more common in boys than in girls. Around 6 times as many patients with Ewing’s sarcoma are male.

Although the cancer can affect the pelvis, ribs and skull, it is most usually found associated with the spine. Cases usually present with severe bone pain, which is usually experienced as back pain.

As the disease is so rare, pain in teenage boys is usually due to some other, less life threatening cause. A positive diagnosis is usually obtained using a series of X-rays followed by Magnetic Resonance Imaging (MRI), which reveals the tumour as a white area in and around the affected bone. The more detailed images produced by MRI can show the full extent of the tumour and can be used, in combination with CT scanning, to assess how the tumour is responding to treatment.

It can be difficult, even so, to distinguish a true Ewing’s sarcoma from osteomyelitis (an infection of the bone marrow), or an osteosarcoma (the most common form of bone cancer). Cancers such as histiocytomas, which arise in fibrous soft tissue, can also look very similar on MRI and CT scans.

Although this is a serious disease, the five year survival rates are actually quite high after aggressive treatment, with 7 or 8 people out over every ten surviving for five years after diagnosis. If it is possible to remove the tumour or a large part of it by surgery, this option is usually taken up. Chemotherapy may be used for several weeks before the operation to reduce the tumour mass. If the tumour is in the pelvis, and has spread to the leg bones, it may be necessary to amputate the leg in order to save the patient.

Chemotherapy is then used in the weeks and months after surgery to try to kill as many of the remaining cancer cells as possible, and to deal with any sites of secondary tumours. Several chemotherapy drugs are usually used, to prevent the tumour becoming resistant to therapy. Radiotherapy can also be used to further reduce the chance of recurrence.

As the genetic basis of Ewing’s sarcoma is known – the tumour cells have portions of two chromosomes that have become swapped – new treatments involving anti-sense DNA technology have been proposed. These bind to the protein produced after the alteration in the cell DNA, which is the primary factor that makes the cell become cancerous. Blocking its activity can cause the cancer cell to die. So far, this treatment has only been shown to be effective in laboratory tests but there is hope that it will become available for human clinical trials and as a future treatment option.

As Ewing’s sarcoma tends to affect teenagers and young adults, such an aggressive combination of chemotherapy and radiotherapy in the abdominal area puts them at risk of becoming infertile. Most treatment specialists advise that eggs and sperm are obtained and frozen before treatment, so that they can be used later using in vitro fertilisation.
Next Page

Signs and Symptoms of Spinal Tumours