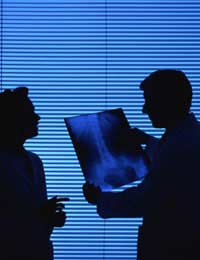 Far from being the longest bone in the human body, the spine is made up of 33 oddly shaped bones called vertebrae which allow for a strong and flexible column. It is not just the bony matter that makes up the spine, there are many other components including intervertebral discs, facet joints muscles, ligaments, tendons, nerves, the spinal canal and of course the spinal cord.

Regions of the Spine

The cervical spine begins at the base of the skull and individual vertebrae become larger the further down the spine they appear. Physicians usually abbreviate vertebrae by using the initial letter of the region and their corresponding sequential number, for example C1 down to C7.

Unlike the rest of the spine, the cervical spine contains a small opening for the passage of blood vessels, carrying blood away from the heart allowing it entry to the brain.

The cervical spine is responsible for the movement of our head and neck, with the first two vertebra, the atlas and the axis, being designed entirely for the rotational movement of the head.

The thoracic spine is found in the chest region of the body and supports the ribs which protect our major organs.The thoracic vertebrae increase in size as they descend down the spinal column, and are not all alike, as some thoracic vertebrae have unique physical characteristics. For example T1 and T9-T12 each possess peculiarities that serve an independent function.

The most prominent part of the kyphotic curve of the thoracic spine is found at T7.

The thoracic spine also has a small degree of lateral curvature and physicians cannot agree why this is so. Many believe it is an anatomical feature, while others believe it depends on which side carries the individual’s dominant dependence. There is evidence to support both of these theories.

The lumbar spine is responsible for bending, twisting and turning, and provides the strength to enable us to lift, thus making it a very vulnerable area and prone to injury.

The true spinal cord ends at L1 where it divides into many nerve roots that extend to the lower body and legs. This collection of roots is called the ‘cauda equina’.

The sacral spine contains 5 fused vertebrae and supports the posterior region of the pelvis. There are marked differences in the shape of the sacral vertebrae between men and women, with women having a shorter and wider version than that of males. Each person’s sacrum has a differing degree of curvature, though in males, the curvature tends to be less and more evenly distributed.

Situated at the bottom of the spine, the coccyx, is made up of between 3 and 5 fused vertebra, and is a left-over evolutionary factor that other vertebrates have to support their tail.

It has a triangular appearance, and size is unique between individuals. Different to other vertebrae, the coccyx is made of solid bone.

Children and Back Pain

Functions of the Spine